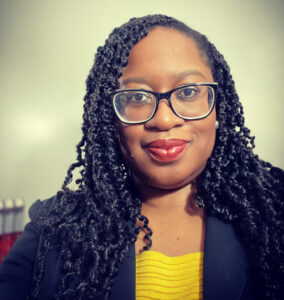 Dr. Keisha N. Blain, a 2022 Guggenheim Fellow and Class of 2022 Carnegie Fellow, is one of the most innovative and influential young historians of her generation. She is an award-winning historian of the 20th century United States with broad interests and specializations in African American History, the modern African Diaspora, and Women’s and Gender Studies. She completed a Ph.D. in History from Princeton University in 2014.

Blain is the author of Set the World on Fire: Black Nationalist Women and the Global Struggle for Freedom, which was published by the University of Pennsylvania Press in 2018. The book won the 2018 First Book Award from the Berkshire Conference of Women Historians (for the best book on women, gender, and sexuality) and the 2019 Darlene Clark Hine Award from the Organization of American Historians (for the best book on African American women’s and gender history). It was also selected as a finalist for several prizes, including the 2018 Hooks National Book Award and most recently, the 2020 Ida Blom–Karen Offen Prize in Transnational Women’s and Gender History. In 2018, the book was selected as one of the best history books by Smithsonian Magazine. It has been featured widely in popular outlets across the nation, including The Washington Post, BuzzFeed, VIBE Magazine, The Root, Vox, Publisher’s Weekly and Public Books.

Blain’s second book, Until I Am Free: Fannie Lou Hamer’s Enduring Message to America, was published by Beacon Press in 2021. The book was nominated for an NAACP Image Award and selected as a finalist for the 2022 National Book Critics Circle Award. It was also selected as one of the best history books by Smithsonian Magazine in 2021. The book has been featured widely in popular outlets, including The New York Times, The Washington Post, and The Guardian.

Blain has also published four edited volumes. She is the co-editor of To Turn the Whole World Over: Black Women and Internationalism (University of Illinois Press, 2019); New Perspectives on the Black Intellectual Tradition (Northwestern University Press, 2018); and Charleston Syllabus: Readings on Race, Racism, and Racial Violence (University of Georgia Press, 2016). Her latest volume is Four Hundred Souls: A Community History of African America, 1619-2019, edited with Ibram X. Kendi (Penguin Random House/One World, 2021). Four Hundred Souls debuted at #1 on the New York Times Best Sellers’ list and was selected as a finalist for the 2022 Carnegie Medal for Excellence in Nonfiction.

Blain is now writing A Global Struggle: How Black Women Led the Fight for Human Rights, which will be published by W.W. Norton. The book offers a sweeping history of human rights framed by the work and ideas of Black women in the United States from 1865 to the present.

Blain’s writings have appeared in several academic journals, including the Journal of Social History and Souls; and popular outlets such as The Atlantic, The Guardian, Time, The Washington Post, Newsweek, Salon, The Feminist Wire, and The Chronicle of Higher Education. She has offered commentary on international, national, and local media outlets, such as BBC, PBS, MSNBC, CNN, NPR, and Al Jazeera.

Blain is one of the co-developers of #Charlestonsyllabus, a Twitter movement and crowdsourced list of reading recommendations relating to the history of racial violence in the United States. It was created in response to the racially motivated shooting that took place in Charleston, South Carolina in June 2015. The #Charlestonsyllabus has drawn international attention from various news outlets including PBS, BBC, NPR, Slate, the LA Times, and the New York Times.

Along with Nathan Connolly, Blain is the co-author of Trump Syllabus 2.0, a mock syllabus and public reading list that explores the deep historical and political roots of Donald Trump’s political success during the 2016 Presidential campaign. The syllabus has been featured in several national publications including New York Magazine, The Chronicle of Higher Education, and VIBE magazine.

Blain served as President of the African American Intellectual History Society (AAIHS) from 2017 to 2021, and as the senior editor of Black Perspectives—the award-winning blog of AAIHS–from 2015 to 2019. She also served as an editor for The Washington Post’s ‘Made by History’ section from 2020-2021. Along with Quito Swan, she is the founding editor of the book series on Black internationalism, published by the University of Illinois Press. She is also a member of the editorial team of the University of Pennsylvania Press’s prestigious book series ‘Politics and Culture in Modern America,‘ working alongside Tom Sugrue, Margot Canaday, Matthew Lassiter, and Stephen Pitti.

Blain is the recipient of more than a dozen prestigious awards and fellowships, including a W.E.B. Du Bois Fellowship at Harvard University and fellowships from New America, the Institute for Advanced Study, the Carr Center for Human Rights Policy, the American Association of University Women (AAUW) and the Ford Foundation. In 2018, she was appointed to the Organization of American Historians’ Distinguished Lectureship Program. In 2022, she became a term member of the Council on Foreign Relations.