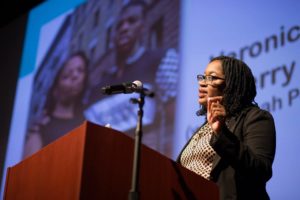 Check out my recent interview with N.D.B. Connolly on Public Books:

Keisha N. Blain has quickly become one of the most innovative and influential young historians of her generation. She serves as president of the African American Intellectual History Society and senior editor of its blog, Black Perspectives. Blain also worked on two widely read crowdsourced syllabi: Charleston Syllabus, edited with Chad Williams and Kidada E. Williams, contextualized the deadly 2015 white terrorist attack on parishioners at Emanuel African Methodist Episcopal Church in Charleston, South Carolina; “Trump Syllabus 2.0,” published on Public Books, took a critical approach to race, gender, class, and disability to understand the political ascension of Donald J. Trump. I spoke with Prof. Blain about her new book, Set the World on Fire: Black Nationalist Women and the Global Struggle for Freedom, and considered how her approach to historical scholarship mirrors contemporary activist efforts.

N. D. B. Connolly (NC): Your book, Set the World on Fire, offers a first-of-its kind exploration of women’s role in the development of global black nationalism. It stops in places as disparate as Chicago, Antigua, Liberia, and the Mississippi Delta. What inspired you to tackle a topic of this scale?

Keisha N. Blain (KB): In many ways, I started conceptualizing this project during my undergraduate years at Binghamton University. At the time, I was taking a class with Prof. Michael O. West on global black social movements. The course was transformative—it was the first time in my life that I had encountered many of the figures we discussed. By its very nature, the class was diasporic—in the 15 weeks or so, we moved rapidly across geographical lines, delving into an array of readings on people of African descent across the globe. This was, for me, the foundations of my intellectual journey. From that moment on, it was difficult for me to even think about black history without thinking transnationally.

It was in that course that I first started thinking critically about women’s roles in nationalist and internationalist movements. I was struck by the masculinist framings of the historical narratives—many of the books I remember reading were about men, and if women did appear, they did so in brief, and often only in their capacity as wives and partners. As a young college student, I was still figuring out this history, but I knew these narratives had to be incomplete. In my quest to find out more about how women shaped these movements, I wrote a term paper on women in the Garvey movement, analyzing their writings in the Negro World newspaper. What started off as a term paper for the class later evolved into an honors thesis.