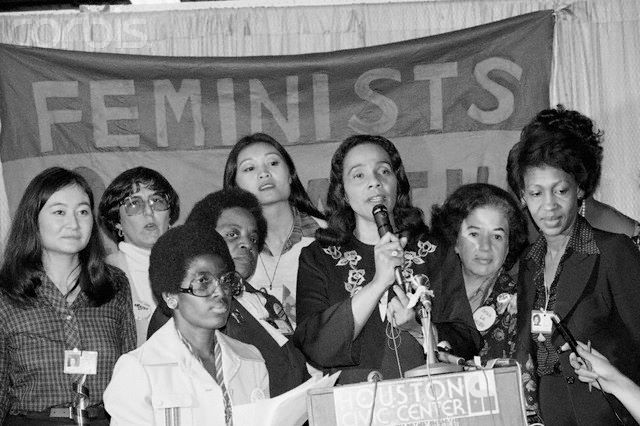 At the recent OAH conference, I participated in a roundtable on “Transnational Circulations of Feminism in the Twentieth Century” with Lisa Levenstein (University of North Carolina at Greensboro), Katherine Marino (Ohio State University) and Judy Tzu-Chun Wu (University of California, Irvine). This is the transcript of my brief remarks.

Black women and other women of color have been historically marginalized in feminist movements in the United States. When Sojourner Truth delivered her famous “Ain’t I A Woman?” speech at a women’s rights conference in 1851, she was pointing out the irony and certainly the hypocrisy of a movement calling for the rights of women while trying to sidestep the issue of abolition—no doubt a crucial concern for black women in the United States.

On various occasions, the same scene have played out over and over again, as black women vigorously pushed back against white feminists who often advocated a feminist agenda lacking an intersectional approach. When we employ a transnational perspective, what we find is more of the same. Insofar as race is concerned, what a transnational perspective reveals is that the structures of white supremacy that sought to marginalize and even exclude black women in the United States worked to marginalize and exclude them outside of the United States.

Yet, black women in the United States and throughout the globe vigorously resisted such marginalization and exclusion, and they devised a range of strategies and tactics to resist both sexism and racism. One of the avenues they utilized during the twentieth century was the Black Press, a crucial platform for black women in the diaspora to articulate their concerns about a range of issues. With limited access to formal politics and in some cases, with limited access to travel, black women found in the Black Press a space from which to advocate for women’s rights, civil rights, and human rights. In many ways, the Black Press also functioned as a means of bridging divides—especially geographic ones. This is evident, for example, through the pages of the Negro World, the official newspaper of the Universal Negro Improvement Association (UNIA), the largest and most influential black nationalist organization of the twentieth century. [click here to read the entire article]