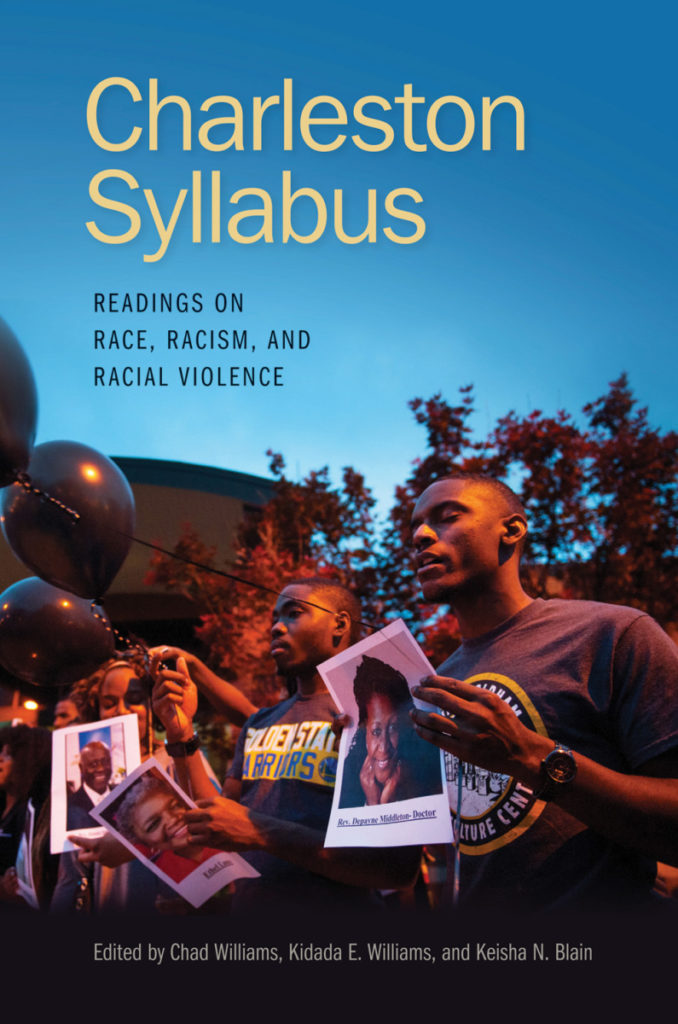 On June 17, 2015, a white supremacist entered Emanuel AME Church in Charleston, South Carolina, and sat with some of its parishioners during a Wednesday night Bible study session. An hour later, he began expressing his hatred for African Americans, and soon after, he shot nine church members dead, the church’s pastor and South Carolina state senator, Rev. Clementa C. Pinckney, among them. The ensuing manhunt for the shooter and investigation of his motives revealed his beliefs in white supremacy and reopened debates about racial conflict, southern identity,systemic racism, civil rights, and the African American church as an institution.

In the aftermath of the massacre, Professors Chad Williams, Kidada Williams, and Keisha N. Blain sought a way to put the murder—and the subsequent debates about it in the media—in the context of America’s tumultuous history of race relations and racial violence on a global scale. They created the Charleston Syllabus on June 19, starting it as a hashtag on Twitter linking to scholarly works on the myriad of issues related to the murder. The syllabus’s popularity exploded and is already being used as a key resource in discussions of the event.

Charleston Syllabus is a reader—a collection of new essays and columns published in the wake of the massacre, along with selected excerpts from key existing scholarly books and general-interest articles. The collection draws from a variety of disciplines—history, sociology, urban studies, law, critical race theory—and includes a selected and annotated bibliography for further reading, drawing from such texts as the Confederate constitution, South Carolina’s secession declaration, songs, poetry, slave narratives, and literacy texts. As timely as it is necessary, the book will be a valuable resource for understanding the roots of American systemic racism, white privilege, the uses and abuses of the Confederate flag and its ideals, the black church as a foundation for civil rights activity and state violence against such activity, and critical whiteness studies.

“This thoroughly remarkable compendium of works about African-American life…offers solid ground for the oft-requested national conversation about race…The book keeps a tight focus on Charleston but still manages to offer a broad account of African-American history, finding space for Islam, women’s issues, and global outreach. This solid offshoot of the original online syllabus (a blockbuster bibliographic tool that’s also included in this volume) is simply a must-read, both for those already versed in these topics and those just getting started.”–Publishers Weekly (starred review)

“Confronting domestic and global white supremacy, this provocative text documents and demonstrates what has been done and what needs doing nationally and internationally to realize racial justice and equality. It deserves reading and discussion by anyone interested in social transformation.”—Library Journal

“A signal contribution, this timely volume provides the central historical and contemporary contexts for teachers, students, and the general public seeking to understand the tragic events in Charleston in 2015. Building on the possibilities inherent in digital crowdsourcing, Charleston Syllabus inaugurates a new model of engagement between academia and the general public around the most pressing issues of our time.”—Leslie M. Harris, author of In the Shadow of Slavery: African Americans in New York City, 1626-1863

“Do inflamed emergencies tend to produce innovative scholarly responses? Even a glancing perusal of this enlightening and brilliant response to the Charleston massacre of 2015 leads inexorably to an emphatic answer: yes! These diligent scholars provide eyeopening historical and contemporary chapters that shed light on why this tragedy occurred—and what must be done to ensure that it will not recur.”—Gerald Horne, author of The Counter-Revolution of 1776: Slave Resistance and the Origins of the United States of America