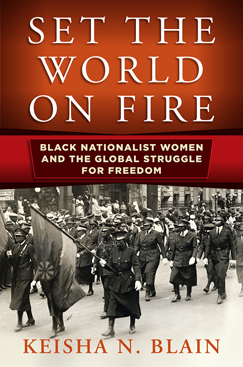 Check out my recent interview with Marius Kothor for the History News Network (HNN):

Historical scholarship on black nationalism and black internationalism generally emphasizes the ideas and experiences of men. With few exceptions, historical accounts marginalize women’s roles in black nationalist and internationalist movements. In a groundbreaking new book, historian Keisha N. Blain makes a significant contribution to this history by showing how critical women were as leaders and organizers in these movements.

Blain’s Set the World on Fire: Black Nationalist Women and the Global Struggle for Freedom (University of Pennsylvania Press, 2018) is the first book of its kind to examine how black nationalist women engaged in national and global politics from the early twentieth century to the 1960s. In this new and original study, Blain charts the diverse ideas and activism of a group of unsung black nationalist women who advocated for the rights and liberation of black people in the United States and abroad. While historians generally portray the period between the Garvey movement of the 1920s and the Black Power movement as an era of declining black nationalist activism, Blain argues that the Great Depression, Second World War and early Cold War represent a golden age of black nationalist women’s political activism. The book draws on an array of primary sources, including archival materials, historical newspapers, government records, songs and poetry.

Dr. Blain is an Assistant Professor of History at the University of Pittsburgh. She is the current president of the African American Intellectual History Society (AAIHS) and senior editor of its blog, Black Perspectives. She earned a doctorate in History from Princeton University. In addition to Set the World on Fire, she is the co-editor of The Charleston Syllabus: Readings on Race, Racism, and Racial Violence (University of Georgia Press, 2016); New Perspectives on the Black Intellectual Tradition (Northwestern University Press, 2018) and To Turn the Whole World Over: Black Women and Internationalism(University of Illinois Press, 2019).

Marius Kothor: Set the World on Fire conceptualizes Mittie Maude Lena Gordon, Ethel Waddell, Celia Jane Allen, Ethel Collins, Amy Jacques Garvey, Amy Ashwood Garvey, Maymie Leona Turpeau De Mena, and several others, as a cohort of black nationalist women. When you first began researching this book, did you initially think of the women as a cohort? When did the idea of writing about them as a collective begin to take shape?

Keisha N. Blain: I began to conceptualize these women as a group very early during the research process once I had a clear sense of how I was defining black nationalism in the study.

As with any ideology, black nationalism is neither static nor monolithic. But for the purpose of this study, I define black nationalism as the political view that people of African descent constitute a separate group or nationality on the basis of their distinct culture, shared history, and experiences. The women profiled in my book all embraced the core tenets of black nationalist thought—Pan-African unity, racial separatism, black pride, political self-determination, and economic self-sufficiency. Regardless of their organizational affiliation, these women embraced these ideas even as their strategies and approaches varied.

Black nationalism, then, functioned as the common thread that brought these women together ideologically during the twentieth century. It also brought them together in real life. Many of the women I profile in the book worked together at some point in their lives—they were all part of a transnational network of black activist women who saw black nationalism as a viable political strategy for challenging global white supremacy.