Mothers Of The Movement, Police Violence And Black Women’s Activism 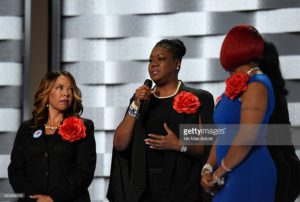 At the recent Democratic National Convention (DNC), a group of black mothers whose sons and daughters have been killed by police violence received a standing ovation after sharing their stories. These “Mothers of the Movement,” as they call themselves, explained why they chose to endorse Hillary Clinton, praising the presidential hopeful for supporting gun control policies that would curb these kinds of incidents. Their featured spot at the DNC convention is a culmination of several months of organizing a series of community and national events aimed at bringing attention to the systemic problem of police violence and brutality in the United States.

Their collective efforts to address these national issues reflect the political activities of a long line of black women, often black mothers, who have mobilized in an effort to end police violence and brutality. During the 1980s, two black women—Mary Bumpurs and Veronica Perry— led a similar initiative in New York City; united by their similar experiences and determined to share their stories with those who would listen. [Full Article]